Just as the first week of classes for the 2017-18 school year began at UNC-Chapel Hill, Hurricane Harvey slammed into the Gulf Coast, leaving tens of thousands of people displaced from their homes.

UNC-Chapel Hill history and political science major Lars Knapp, 22, didn’t waste time volunteering to help those affected by the largest flooding event in U.S. history. And this wasn’t his first hurricane response. Lars signed up to become a Red Cross volunteer after Hurricane Matthew struck Eastern North Carolina in October 2016. Lars said he felt the need to help those suffering from Hurricane Harvey because he understood the need for support following a major disaster.

So on Aug. 25, 2017, Lars and another Red Cross volunteer drove a Red Cross emergency response vehicle from the Durham Red Cross office to Texas. Severe weather forced the two drivers to make an initial stop at a shelter in Livingston, Texas. It was not a Red Cross shelter, but the management there welcomed the guidance of Lars and his colleague.

Lars immediately put himself to use. In the shelter, there were several Spanish speakers and Lars was the only one who could translate. He used his bi-lingual skills to help a diabetic lady get her insulin, and another to get basic necessities for her children.

After spending four days in Livingston, Lars and his colleague made the drive to their planned destination of Houston, Texas. There, Lars helped again in a shelter. He met one shelter resident who had a job interview the day after the hurricane made landfall. With the opportunity in front of him, the man was now faced with a lack of transportation or proper clothing. Determined to help, Lars set up an Uber ride for transportation, and helped the man find proper attire. The man landed the job.

In Houston, Lars said he had never seen sheltering on such a large scale. He also witnessed kindness, and said there were so many people who wanted to volunteer. He said on one Saturday in his location, the Red Cross processed 600 event-based volunteers who were able to start helping immediately.

“You never know when a natural disaster is going to strike your family. Be there for other people’s family so someone will be there for yours,” Lars said.

In a shelter, Lars said Red Crossers provide services such as mental and physical health screenings, spiritual care, food, hygiene items, and any other necessities to help families on the road to recovery. Before leaving a shelter, many are assigned a case manager.

Lars said balancing volunteer work and school isn’t easy, but he values both his education and the practical skills he gains volunteering. He said if he could get any job out of college it would be with the Red Cross.

If you, like Lars, enjoy meeting people and want to give back, check out www.redcross.org/volunteer.

Photo: Lars Knapp reads to children at a shelter in Texas. 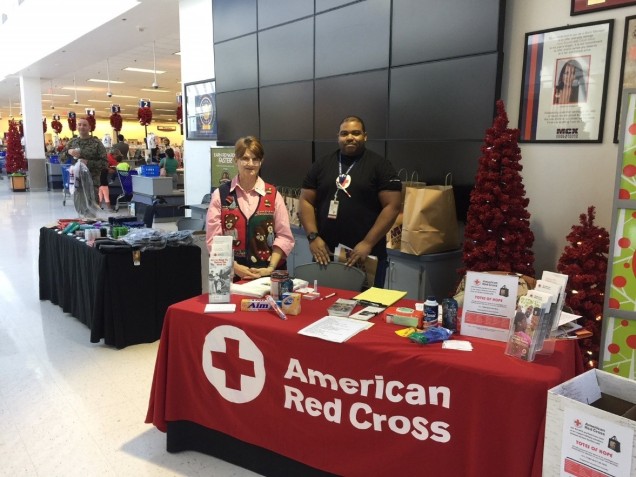 Totes of Hope is a personal care kit drive in which items for homeless veterans are collected, assembled in a backpack or tote bag, and distributed through veteran’s hospitals or veterans outreach programs. Kit items include socks, toothbrushes, deodorant, shampoo, etc. The care kits also include a personal note of thanks to veterans.

At the event, one Marine shared with his young son, “This is what we do to help those who need our help. It’s our way of paying [it] forward to our fellow comrades who are our brothers and sisters.” 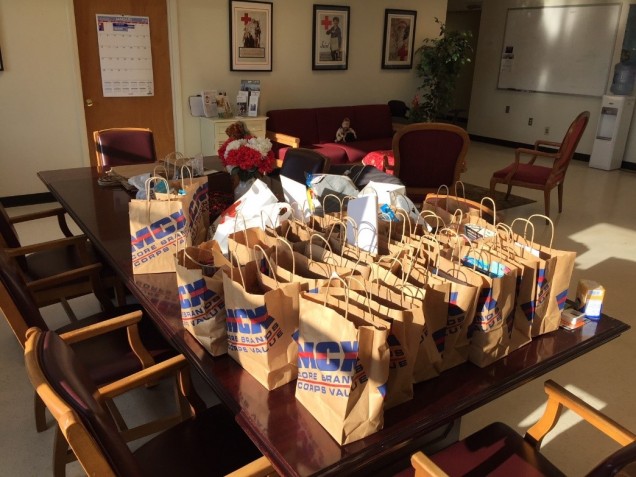 A special thank you to George Blalock and Catherine Bruggeman of Marine Corps Exchange for hosting and providing display of items for purchase.